What are chia seeds?

Chia seeds are the tiny seeds of salvia hispanica which is commonly known as chia plant. It is a species of flowering plant in the mint family which is originally from central and southern Mexico and Guatemala. Chia seeds can be black or white (brown indicates that the seed is unripe). There is no difference nutritionally. If you look at them closely, you’ll notice they are covered with the unique and organic wavy patterns on the surface of each seeds.

Codex Mendoza, the sixteenth-century evidence, shows that chia seeds were cultivated by the Aztec in pre-Columbian times as early as 3500B.C. In fact, it was one of the main foods in the Aztec diet. Economic historians say it may have been as important as maize as a food crop. Later, between 1500 and 900B.C, it was grown in Mexico by the Teotihuacan and Toltec people. Aside from being eaten whole, these people had some extended uses for them. They were used in medicine, ground into flour, mixed as an ingredient in drinks, and pressed for oil. As the oil form, it became extremely useful because it could be stored for relatively long periods of time especially for traveling. In addition to these practical uses, chia seeds ran deeper in the blood of the Aztecs. It was sacred and used as a sacrifice tribute in religious ceremonies. 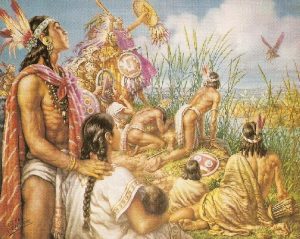 The word “chia” is derived from the Nahuatl word “chian”, meaning oily. In ancient Mayan, “chia” means “strength”. The ancient civilizations believed that the chia seeds provided supernatural powers. This probably has to do with the large amounts of energy provided by chia seeds. Ancient warriors attributed their stamina to this tiny seed. The Mexican Tarahumara tribe is famous for their runners. These runners drink a mixture of chia seeds, lemon, and water called Iskiate. After drinking this, they are said to be able to run hundreds of miles.

Chia seeds, in actuality, don’t have a very strong flavor. Therefore, they can easily be included in a wide range of foods for a little texture. They also form a sort of gel when mixed with liquid. Some people substitute chia seeds for eggs or used as a soup thickener. They are most often sprinkled on cereal, sauces, vegetables, rice dishes, or yogurt or mixed into drinks and baked goods.

What are the benefits of taking chia seeds?

Chia seeds are among the healthiest foods on the planet. They are loaded with nutrients which benefit your body and brain. Chia seeds contain large amounts of fiber and omega-3 fatty acids, plenty of high quality protein, and several essential minerals and even antioxidants. Here are some health benefits of chia seeds that are supported by human studies.

Don’t underestimate them by the size. Chia seeds might seem tiny but these little seeds pack a powerful nutritional punch. According to the United States Department of Agriculture (USDA) National Nutrient Database, a 28-gram, or one-ounce serving of chia seeds contains:

Eating once ounce of chia seeds each day would provide 18 percent of daily calcium needs, 27 percent of phosphorus, 30 percent of manganese, and smaller amounts of potassium and copper. Compared with flaxseed, chia seeds provide more omega-3s, calcium, phosphorus, and fiber. Most people do not consume enough of these essential nutrients. They also contain a decent amount of Zinc, Vitamin B3 (Niacin), Potassium, Vitamin B1 (Thiamine) and Vitamin B2.

What are antioxidants? Antioxidants protect the body from damage caused by harmful molecules called free radicals. Many experts believe this damage is a factor in the development of blood vessel disease (atherosclerosis), cancer, macular degeneration, Alzheimer’s disease, and some arthritis-related conditions.

Antioxidants include some vitamins (such as vitamins C and E), some minerals (such as selenium), and flavonoids, which are found in plants. And chia seeds are loaded with antioxidants. Most importantly, antioxidants fight the production of free radicals, which can damage molecules in cells and contribute to ageing and diseases like cancer.

Benefit 3: Most of The Carbs in Chia Seeds Are Fiber

Looking at the nutrition profile of chia seeds, you see that an ounce has 13.07 grams of “carbohydrate” yet 11.2 grams are fiber, which isn’t digested by the body. Fiber doesn’t raise blood sugar, doesn’t require insulin to be disposed of and therefore shouldn’t count as a carb. The true carb content is only 1 gram per ounce, which is very low. This makes chia a low-carb friendly food.

The Food and Nutrition Board of the National Institute of Medicine suggest that men under the age of 50 years should consume 38 grams of fiber per day and women under the age of 50 years should consume 25 grams per day. For adults over 50 years of age, the recommendation for men is 30 grams per day, and for women, it is 21 grams per day. Most people consume less than half of that recommendation. The easiest way to increase fiber intake is to eat more plant-based foods like fruits, vegetables, nuts, seeds, and unprocessed grains. Just one ounce of chia seeds provide 11.2 grams of fiber, over half the daily recommendation for a woman over 50 years.

Because of all the fiber, chia seeds can absorb up to 10-12 times their weight in water, becoming gel-like and expanding in your stomach. Theoretically, this should increase fullness, slow absorption of your food and help you automatically eat fewer calories. Fiber also feeds the friendly bacteria in the intestine, which is important because keeping your gut bugs well fed is absolutely crucial for health. Chia seeds are 40% fiber, by weight. This makes them one of the best sources of fiber in the world.

Chia seeds contain a decent amount of protein. By weight, they are about 14% protein, which is very high compared to most plants. Protein has all sorts of benefits for health. It is also the most weight loss friendly nutrient in the diet, by far. A high protein intake reduces appetite and has been shown to reduce obsessive thoughts about food by 60% and the desire for night time snacking by 50%.

Aside from chia seeds’ fiber content, their high levels of omega-3-fatty acids and alpha-linoleic acid are useful for weight loss as well. However, it’s important to keep in mind that the Omega-3s in them are mostly ALA (Alpha Linolenic Acid), which is not as beneficial as you may think. ALA needs to converted into the “active” forms, EPA and DHA, before it can be used by the body. Unfortunately, humans are inefficient at converting ALA into the active forms. Therefore, plant Omega-3s tend to be vastly inferior to animal sources like fish. In order to get the DHA your body and brain desperately need, you either eat fatty fish regularly, take fish oil, or take a DHA supplement if you are vegan or vegetarian.

Chia seeds are full of wonders, yet balanced diet is the key to maintain healthy.

Benefit 7: They Are High in Many Important Bone Nutrients

Chia seeds are high in several nutrients that are important for bone health. This includes calcium, phosphorus, magnesium and protein. The calcium content is particularly impressive… 18% of the RDA in a single ounce. Gram for gram, this is higher than most dairy products. Chia seeds may be considered an excellent source of calcium for people who don’t eat dairy.

Benefit 8: Chia Seeds Can Cause Major Improvements in Type 2 Diabetics

When they got the chia seeds, they saw improvements in several important health markers. Blood pressure went down by 3-6 mm/Hg and an inflammatory marker called hs-CRP went down by 40%. A risk factor called vWF also decreased by 21%. There was also a small drop in blood sugar, but it wasn’t statistically significant.

Given that chia seeds are high in fiber, it does seem plausible that they could help reduce blood sugar spikes after meals, but this needs to be confirmed in studies.

Benefit 9: Chia Seeds Are Easy to Incorporate Into Your Diet

The mild, nutty flavor of chia seeds makes them easy to add to foods and beverages. They also don’t need to be ground like flax seeds, which makes them much easier to prepare. They can be eaten raw, soaked in juice, added to porridge and pudding, or added to baked goods. You can also sprinkle them on top of cereal, yogurt, vegetables or rice dishes.

Because of their ability to absorb both water and fat, they can be used to thicken sauces and even used as egg substitutes in recipes. They can also be mixed with water and turned into a gel. Adding chia seeds to recipes will dramatically boost the nutritional value. A common dosage recommendation is 20 grams (about 1.5 tablespoons) of chia seeds, twice per day.

Benefit 10: Chia Seeds Are One of Superfoods

What are superfoods? Superfoods are foods — mostly plant-based but also some fish and dairy — thought to be nutritionally dense and thus good for one’s health. Blueberries, salmon, kale and acai are just a few examples of foods that have garnered the “superfood” label.

However, there are no set criteria for determining what is and what is not a superfood, according to the American Heart Association.

“Superfoods don’t have their own food group,” said Despina Hyde, a registered dietician with the weight management program at New York University’s Langone Medical Center. “As a dietician, I think ‘superfood’ is more of a marketing term for foods that have health benefits.”

Consuming foods that are packed with nutrients (as many so-called superfoods are) is certainly a good idea, Hyde told Live Science. But the key to a healthy diet is to consume a variety of nutritious foods in the right quantities, she added.

Chia seeds are among the few trendy “superfoods” that are actually worthy of that term.

Read More: What Are The Popular Superfoods?

Note 1: RDA (Recommended Daily/Dietary Allowance). The quantity of a particular nutrient that should be consumed daily in order to maintain good health.